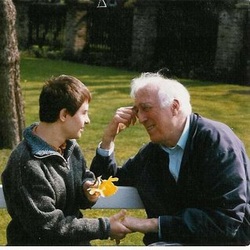 For nearly four decades, Jean Vanier has travelled the world fashioning a network of homes where people with developmental disabilities, volunteers and a sprinkling of staff live together in community. Those we lock away and think worthless, he says, have the power to teach and even to heal us. We are all “broken” in some way, he believes. (…) “When you start living with people with disabilities”, he says, “you begin to discover a whole lot of things about yourself.” He learned that to “be human is to be bonded together, each with our own weaknesses and strengths, because we need each other.” (…) Tall and stooped, Vanier radiates the strength of a man who has fought his own inner battles and surfaced with peace. (Maclean’s/September 4, 2000, p.33)

Jean Vanier was born on September 10, 1928, in Geneva, Switzerland, where his father, General Georges Vanier, was on a diplomatic mission. Most of his early schooling was in England where he lived until World War II when his parents send him and his four brothers and one sister back to Canada.

Two years later, the young Jean decided to enter the Royal Naval College in England. Too young to become a soldier, he assisted his mother in her Red Cross work in Paris after the liberation, helping with those returning from the concentration camps. In 1945, Jean received his officer’s commission and began his naval career.

Despite the promising career that lay in front of him, he was more and more drawn into prayer and reflection on what might be God’s call for him. In 1950, he resigned from the Navy to study philosophy and theology at the Institut Catholique in Paris. It was there where he met Father Thomas Philippe, a Dominican priest and professor who was to become Jean’s spiritual mentor and friend.

In 1963, having published his doctoral thesis on Aristotle, he returned to Canada to teach at the University of Toronto. Again, he decided against the security of a career and left job and homeland to join Father Thomas Philippe who had become chaplain to a small institution for men with developmental disabilities, the Val Fleury, in Trosly-Breuil. In 1964 Jean decided to settle in Trosly to live with people with an intellectual disability. He bought a small house and named it “L’Arche”, the French word for Noah’s Ark.

Though heavily involved in the rapidly growing community, Jean began to give conferences and retreats around the world. In 1969, following a retreat he gave in Ontario, the first community of L’Arche in North America was founded. The next year, again after a visit by Jean, the first L’Arche community in India was founded. In 1968 Jean Vanier also co-founded Faith and Sharing. In these communities, families who have a member with a disability and their friends meet once a month for prayer and mutual support and celebration. Three years later, the organisation of a pilgrimage of 12.000 people with developmental disabilities, their friends and families to Lourdes led to the co-founding of Faith and Light with Marie-Hélène Mathieu. This sister pilgrimage movement unites people with an intellectual disability and their family members and friends for regular gatherings and periodic pilgrimages of friendship, prayer and celebration. In the early 1990s, Jean Vanier founded Intercordia, which provides university students with an accredited cross-cultural experience in social education and personal growth among poor or marginalized peoples in the developing world.

L’Arche was spreading rapidly, and aware that it was important to call forth others who could lead, Jean handed over the leadership of the International Federation of L’Arche communities to the first International Coordinator in 1981. Jean Vanier continued to sit as Founder on the International Council of L’Arche. He also continued to travel a great deal encouraging L’Arche communities and giving spiritual accompaniment and guidance to the many people who come to him from within and beyond L’Arche.

Jean Vanier has received numerous awards, amongst which are the French Legion of Honour, Companion of the Order of Canada, the Rabbi Gunther Plaut Humanitarian Award 2001 and the recent Chicago Catholic Theological Union “Blessed are the Peace-makers” award, 2006.

Up until today, Jean Vanier continues to travel the world to give retreats and conferences; the 1998 CBC Massey Lectures are just one prominent example. In 2006 he travelled, amongst other areas, to Africa, Indonesia and the USA. He also continues to write; his books have been translated into 29 languages. Jean continues to live in the first L’Arche community in Trosly-Breuil, France.
Respectful terminology to describe the people who are at the heart of L'Arche and for whom L'Arche was founded varies from one country to another. We invite you to substitute the terms used on this website with those that are used and accepted in your country.

BOB ABERNETHY, anchor: Forty-two years ago, in a village south of Paris, a French-Canadian named Jean Vanier created a home where the mentally disabled could live in dignity and where others could learn from them the value of sharing and acceptance. There is now a worldwide network of these communities called L’Arche, the French word for Arc, a symbol of hope. Vanier rarely leaves his community in France, but he did recently come to Chicago, as Judy Valente reports.

JUDY VALENTE: These are the people Jean Vanier calls his friends. People he describes as “pushed aside, with broken hearts.” People, he says, who have “transformed” him.

JEAN VANIER (Founder, L’Arche House): My life is to live with them — to be with those who are fragile, vulnerable and weak. I’m not sure that we can really understand the message of Jesus if we haven’t listened to the weak.

JEAN WILSON (Core Member, L’Arche House): He’s my one man and my one man only — I love this man.

VALENTE: Those who came to greet him included the residents and staff of the L’Arche house he helped establish in Chicago. The mentally challenged here are called “core members” because they represent the “core,” or heart, of L’Arche.

Mr. VANIER (at microphone with Elbert Lott): We’re different. We have different backgrounds. But we’re together.

ELBERT LOTT (Core Member, L’Arche House, at microphone): I had a hard time. Rough times. Barefoot boy, down south. My father be mean to me.

Mr. VANIER: (to Mr. Lott) Because Dad wanted a son who could maybe do big things, and he looked down upon you.

Mr. VANIER: He was mean to you.

Mr. LOTT: He was. Well, all that now behind me now. Here I am, famous.

VALENTE: Jean Vanier talks about the loneliness of people who are different — how they can feel unwanted, unloved, and therefore unlovable. But, he says, the weak and wounded have a “secret power” to touch us. And that by opening our hearts to them, we become more human.

Mr. VANIER: We become more human with two realities. One, as we discover that we are able to love people — and when I say love people, it means to see their value and their beauty — and that we can love people who have been pushed aside, humiliated, seen as having no value. And then we see that they are changed. And at the same time, we discover that we too are broken, that we have our handicaps. And our handicaps are around about elitism, about power, around feeling that value is just to have power.

VALENTE: Before coming to L’Arche, these people were in institutions, or on the streets, or in families that couldn’t care for them or didn’t want to.

VALENTE: The son of a French-Canadian diplomat, Vanier served in the British Royal Navy during World War II, then he taught philosophy in France. He has never married. For a time, he considered the priesthood. But in 1964, he found his calling, opening the first L’Arche home in a small village south of Paris.

LINNEA FIELDS (House Coordinator, L’Arche House, to Chris Abri): And where are these mugs going?

VALENTE: The Chicago L’Arche community owns a home on the city’s west side. The core members, with the help of the assistants who live with them, have prepared gift packages to distribute during Vanier’s visit to the city. Some have met Vanier during his previous travels.

VALENTE (to Mr. Lott): What did you talk about?

VALENTE (to Ms. Wilson): What will you say to him when he comes?

Ms. WILSON: Come on in, we’ll give you something to eat and drink.

Mr. ABRI: Because I like him, because he’s a big tall guy and got gray hair that I like.

VALENTE: Most of the core members have outside jobs. Here, they live family-style, helping with chores and with the cooking. The homes are grounded in the Catholic faith, but core members don’t have to be Catholic to live there. Vanier refers to L’Arche communities as “little places where love is possible.”

Ms. FIELDS: They know this is their home. I’ve seen the core members grow in their self-confidence a great deal.

VALENTE: But these small communities are not without their problems.

Ms. WILSON (to Mr. Abri): Chris, get the cups! What’s the matter with you? Gee whiz.

Mr. VANIER: There are explosions, there can be violence, there can be conflicts with other assistants. There’s a sort of constant paradox that through all this suffering and pain and fatigue, at the same time we are seeing incredible beautiful things. That is to say, people who are transformed and we are beginning to sense that we ourselves are transformed.

Ms. FIELDS: I think the prayer time is what sets us apart. That’s what drew me to L’Arche, the spirituality.

Core Members, L’Arche House, praying: Jesus, we thank you that you’re here with us now.

Mr. VANIER: Prayer is a sort of opening of a door to something, which gives meaning to all the pain of the finite. And yet it’s something we can just rest in. I think fundamentally, prayer is to rest.

VALENTE: The 77-year-old Vanier was in Chicago to accept a lifetime achievement award. He dressed for this occasion as he always dresses: in an open shirt and his trademark blue windbreaker.

Mr. VANIER: People with disabilities are not in rivalry and competition. What is their cry? Their fundamental cry, which I had the privilege to hear, is a very simple question: “Do you love me? Do you want to be my friend?” So that’s what L’Arche is about. It’s becoming a friend.

VALENTE: Vanier told this well-heeled audience that generosity is good. But he challenges people to go beyond “giving.”

VALENTE: Vanier expects L’Arche to thrive long after he’s gone. People will continue to be called to these communities, he says — not because of anything he’s accomplished, but because their hearts have been touched by the weak and rejected.

Mr. VANIER (at microphone): Living in community — L’Arche — it can be painful. But it’s super. I never understand why everybody’s not there. This is my problem. We have fun together. We laugh, we sing together. It’s great!

I can say that we have seen people rising from the dead — who arrived in there closed up in their anguish, their angers. And then discovering peace.

VALENTE (to Mr. Vanier): What’s left to be done in your life?

VALENTE: But on this day, he’s content to enjoy life — with his friends.

ABERNETHY: There are more than 130 L’Arche communities in 33 countries

PLEASE LISTEN TO THE TALK BY JEAN VANIER:

THIS POST IS DEDICATED TO THE SISTERS OF MERCY AND THE NUNS OF ST ELIZABETH'S CONVENT IN MINSK WHO TAUGHT ME WHAT JEAN VANIER SAYS HERE.  BOTH THE SISTERS IN MINSK  AND L'ARCHE SHOW US THE GLORY OF TABOR SHINING THROUGH BROKEN PEOPLE.
Powered by