the holy name of jesus

THE WESTERN, LATIN DEVOTION TO THE HOLY NAME 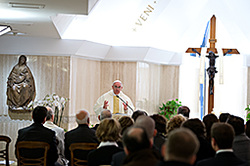 2013-04-06 L’Osservatore Romano: Homily of Pope Francis
Only the name of Jesus is our salvation.  Only he can save us. And no one else. Even less the modern “magicians” with their improbable tarot card prophecies that bewitch and delude men and women today.

And it was on the name of Jesus that Pope Francis focused his reflection on Friday morning, 5 April, in the Octave of Easter, at the Mass he celebrated in the Chapel of the Domus Sanctae Marthae with the participation of the Sediari pontifici (the pontifical chair-bearers), and those in charge, employees and religious of the St John of God Brothers who work at the Vatican Pharmacy.

The Pope drew inspiration in particular from the First Reading from the Acts of the Apostles (4:1-12), to think about the value and significance of the name of Jesus. The passage presents the episode of Peter and John who were arrested because they were preaching Christ's Resurrection to the people and were led before the Sanhedrin. To the question as to whether they had healed the cripple at the door of the Temple, Peter answered that they had done so “by the name of Christ”. In the name of Jesus, the Pope repeated, adding: “He is the Saviour, this name, Jesus. When someone says Jesus, it is he himself, that is, the One who works miracles. And this name accompanies us in our heart”.

In John's Gospel too, the Pope added, the Apostles seemed to have taken leave of their senses, “because they had caught nothing after fishing all night. When the Lord asked them for something to eat they were replied somewhat curtly 'no'. Yet “when the Lord told them to 'cast the net on the right side of the boat, and you will find some', perhaps they were thinking of the time when the Lord told Peter to start fishing and he had answered precisely: “We toiled all night and took nothing! But at your word I will let down the nets'”.

Then returning to the Acts, Pope Francis explained that “Peter reveals a truth when he says: 'by the name of Jesus Christ of Nazareth'. Because he answers inspired by the Holy Spirit. In fact we”, he continued, “cannot profess Jesus, we cannot speak of Jesus, we cannot say anything about Jesus without the Holy Spirit”. It is the Holy Spirit himself “who urges us to profess Jesus or to talk about Jesus or to have trust in Jesus”. And is it Jesus himself who is beside us “on our journey through life, always”.

The Pope then recounted a personal experience linked to his memory of a man, the father of eight, who worked for 30 years in the Archiepiscopal Curia of Buenos Aires. “Before going out, before going to do any of the things he had to do”, the Holy Father said, “he would always whisper to himself: 'Jesus!'. I once asked him  'But why do you keep saying “Jesus?”'. 'When I say 'Jesus', this humble man answered me, ‘I feel strong’, I feel able to work because I know he is beside me, that he is keeping me'”. “And yet”, the Pope said, this man “had not studied theology: he had only the grace of Baptism and the power of the Spirit”. And “his witnessing”, Pope Francis then admitted, “did me so much good. The name of Jesus. There is no other name. Perhaps it will to do good to all of us”, who live in a “world that offers us such a multitude of 'saviours'”. At times, “whenever there are problems”, he noted, “people do not commend themselves to Jesus, but to others”, even turning to self-styled “magicians”, “that they may resolve  matters”; or people “go to consult tarot cards”, to find out and understand what they should do. Yet it is not by resorting to magicians or to tarot that salvation is  found: it is “in the name of Jesus. And we should bear witness to this! He is the one Saviour”.

Then he made a reference to the Virgin Mary's role. “Our Lady”, Pope Francis said, “always takes us to Jesus. Call upon Our Lady, and she will do what she did at Cana: 'Do whatever he tells you!'”. She “always leads us to Jesus. She was the first person to act in the name of Jesus”. The Pope concluded by expressing a wish: “today,  which is a day in the week of the Lord's Resurrection, I would like us to think of this: I entrust myself to the name of Jesus; I pray, 'Jesus, Jesus!'”.

The Feast of the Holy Name of Jesus is a Christian holiday observed anywhere from the first to the eighth of January, observing the naming of Jesus Christ on the eighth day of his life. It is a time to honor the revelation of Jesus' name by dream to Saint Joseph, and likewise the revelation of the same to Mary by the Archangel Gabriel at the Annuciation. Although officially eliminated from the liturgical calendar in AD 1970, it was later reinstituted by Pope John Paul II as an optional day of memorial celebrated on January 3rd.

The Holy Name Itself
The Holy Name refers to the name of Christ, as revealed through divine intervention to Joseph and Mary. It is most often seen in emblem form as "I. H. S.", a Latin abbreviation of Christ's name. While the letters themselves are not considered intrinsically holy, they stand as a reminder of blessings received through Christ's love and mercy.

History of the Feast
The Feast of the Holy Name originated toward the end of the 15th century, celebrated between New Year's Day and Epiphany. In its older incarnations, the Feast was a celebration of Christ's naming andcircumcision (Luke 2:15-21), and thus a memoriam of the first shedding of the Lord's blood. In its modern form, it is considered to be the central feast of all the mysteries of Jesus Christ.

The greatest promoters of the Feast of the Holy Name of Jesus were two Christian saints - St. Bernadino of Sienna and his disciple, St. John Capistrano. During the time of their ministry, they carried a monogrammed copy of the holy name beautifully painted on a tablet, with which they performed miracles and healed the sick. At the end of their sermons, they would ask the faithful to prostrate themselves before the emblem of Christ's name. They also began the practice of placing Jesus' monograms over gates and doorways.

This behavior was considered slightly heretical at first, resulting in St. Bernadino being called before a papal tribunal for his actions. Capistrano, however, defend his master's practice so skillfully and successfully that the Pope, Martin V, allowed worship of the holy name, and even assisted in a procession of the tablet. The tablet itself has survived, and is now housed at the basilica of Santa Maria in Aracoeli, Rome.

In spite of its removal from the liturgical calendar, the Feast of the Holy Name of Jesus continues to be an important celebration for Christians, especially those in the Western world. It is a time for reflection on the divine revelation of the name of Jesus Christ and the miraculous power for good it can inspire in his followers. 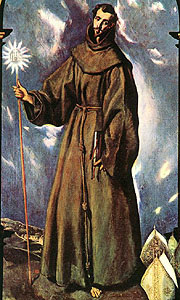 The name of Jesus is the glory of preachers

"The name of Jesus is the glory of preachers, because the shining splendor of that name causes his word to be proclaimed and heard. And how do you think such an immense, sudden and dazzling light of faith came into the world, if not because Jesus was preached? Was it not through the brilliance and sweet savor of this name that God called us into his marvelous light? When we have been enlightened, and in that same light behold the light of heaven, rightly may the apostle Paul say to us: Once you were darkness, but now you are light in the Lord; walk as children of light.

So this name must be proclaimed, that it may shine out and never be suppressed. But it must not be preached by someone with sullied mind or unclean lips, but stored up and poured out from a chosen vessel. That is why our Lord said of Saint Paul: He is a chosen instrument of mine, the vessel of my choice, to carry my name before the Gentiles and kings and the sons of Israel. In this chosen vessel there was to be a drink more pleasing than earth ever knew, offered to all mankind for a price they could pay, so that they would be drawn to taste of it. Poured into other chosen vessels, it would grow and radiate splendor. For our Lord said: He is to Carry my name.

When a fire is lit to clear a field, it burns off all the dry and useless weeds and thorns. When the sun rises and darkness is dispelled, robbers, night-prowlers and burglars hide away. So when Paul's voice was raised to preach the Gospel to the nations, like a great clap of thunder in the sky, his preaching was a blazing fire carrying all before it. It was the sun rising in full glory. Infidelity was consumed by it, false beliefs fled away, and the truth appeared like a great candle lighting the whole world with its brilliant flame.

By word of mouth, by letters, by miracles and by the example of his own life, Saint Paul bore the name of Jesus wherever he went. He praised the name of Jesus at all times, but never more than when bearing witness to his faith. Moreover, the Apostle did indeed carry this name before the Gentiles and kings and the sons of Israel as a light to enlighten all nations. And this was his cry wherever he journeyed: The night is passing away, the day is at hand. Let us then cast off the works of darkness and put on the armor of light; let us conduct ourselves honorably as in the day. Paul himself showed forth the burning and shining light set upon a candlestick, everywhere proclaiming Jesus, and him crucified.

And so the Church, the bride of Christ strengthened by his testimony, rejoices with the psalmist, singing: 0 God, from my youth you have taught me, and I still proclaim your wondrous deeds. The psalmist exhorts her to do this, as he says: Sing to the Lord, and bless his name, proclaim his salvation day after day. And this salvation is Jesus, her savior."